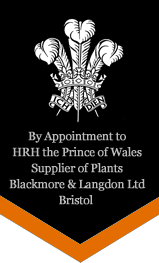 The horticultural firm of Blackmore and Langdon celebrated its centenary in 2001.
James Barret Blackmore was born in 1854 in the village of Newton St Loe on the outskirts of Bath, Somerset.
In 1868 Charles Frederick Langdon was born also in Newton St Loe.
James trained as an engineer but took over the ownership of a public house in Twerton, Bath on the death of his grandparents. He grew begonias in a greenhouse at the bottom of the garden.

Charles grew up on the estate of Earl Temple of Stowe at Newton Park, the son of a woodsman but followed a career in gardening moving to the Rectory in Newton St Loe and working for the Rev. Lascelles. His employer financed and encouraged his interest in the breeding and growing of begonias and delphiniums. 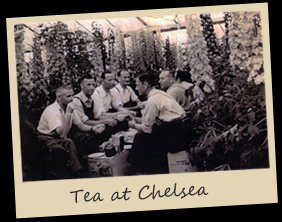 James and Charles met at Bath Flower Show, both men exhibiting prize begonias!
The friendship which developed matured into a business partnership when James sold the Crown Inn at Twerton to finance the buying of land in Bath and so in 1901 the firm of Blackmore & Langdon was created.
Both men had families and marriages took place between the families. Millicent Blackmore married Allan Langdon and Blanche Langdon married Tom Blackmore.

James and Charles embarked on the business of breeding fantastic begonias and delphiniums but quickly found this in itself was not enough to sustain a business. Other plants were added to the range such as carnations, lilies of the valley, canna lilies, cyclamen, roses, polyanthus, aquilegia, phlox, gloxinias, michaelmas daisies and even violets in the early days which were sold in small bunches as cut flower in the abbey courtyard in the centre of Bath. A florists department on the nursery was added and thrived making floral wreaths and wedding bouquets.

Jim Blackmore & Charles Langdon continued to be major hybridisers of delphiniums and begonias throughout their lifetimes.
In the early part of the twentieth century plants were taken to shows by horse drawn vehicles and by rail. Blackmore & Langdon‘s truck was a familiar site in Bath heading for the railway station drawn by two large shire horses, causing sparks to fly from the road when going downhill! Staff manning the show stands had no such luxury as a bed in a caravan or hotel. The van in which the plants travelled was home to them once emptied of its precious cargo. The youngest staff member was dispatched immediately on arrival at the show ground to find the nearest supply of beer with orders to return with a crate to sustain the staff!

Working through the war

The war years saw Land Girls doing the jobs normally done by male staff who had gone to war. Foodstuffs were grown during this period – sweet corn (for the injured American servicemen being cared for at St Martins‘ hospital in Bath), chicory and tomatoes. The stocks of precious begonias and delphiniums were retained although the field of peony plants was lost when Hitler managed a direct hit! Some of the greenhouses were destroyed during those war years and valuable begonia tubers only saved by a lot of hard work. The clear up must have been a nightmare but at least no staff were injured. The older members of staff and family worked for the Home Guard patrolling the Bath streets at night helping out where necessary. The Blackmore house was extensively damaged but no fatalities occurred.
Over the years Blackmore & Langdon have exhibited their plants at major flower shows throughout the country and have witnessed many changes. The national seed firms used to create displays at Chelsea as did many Parks departments from major cities.

The firm has been awarded many Gold, Silver Gilt and Silver medals. The first exhibition group put up with the Royal Horticultural Society quite soon after the founding of the nursery gained a Gold Medal – this was in 1903 in London at the Temple Show which was the for-runner of the Chelsea Flower Show. Blackmore & Langdon have been awarded at least eighty Gold Medals by The Royal Horticultural Society for displays at The Chelsea Flower Show and they have attended every single Chelsea Flower Show since its inauguration in 1913 and prior to that attended the Temple Show.

We are still going strong!

Knowledge of growing, breeding and propagation has been handed down from father to son in this unique family business. Four generations have continued a legacy which is thriving today. The firm is still owned and run by the family – John and Rosemary Langdon who are officially retired and their sons Simon, Stephen and Nicholas Langdon who are the great grandsons of Charles Langdon. The Blackmore side of the business survived only two generations. Hundreds of Gold medals have been awarded for displays at the many Flower Shows attended. This is in recognition of the high standard of the plants, all of which have been bred by Blackmore & Langdon. New introductions are always exhibited at The Chelsea Flower Show and a recent introduction was the first fragrant begonia raised by the firm. This was following many years of hybridising and selecting. It is a delicate coral pink and has a perfume akin to the smell of a rose.

The company sends dormant begonia tubers to enthusiasts throughout the world, many going to Japan, Australia & New Zealand as well as Canada and the U.S.A. Delphiniums raised by the firm grace many prestigious gardens in the UK.

Note: We have updated our website so any existing customers will need to reregister. Dismiss